Text written for Jannis Kounellis’s Exhibition in Rome at the Galleria Giacomo Guidi Arte Contemporanea and published on Exibart.

It is by lending his body to the world that the artist changes the world into paintings.

In the small hall in front of the entrance stairs: one painting made of a canvas painted yellow, crossed by a vertical beam of iron (slightly to the left) hanging from the ceiling. The lower end of the beam is fitted with a knife whose tip touches the floor. 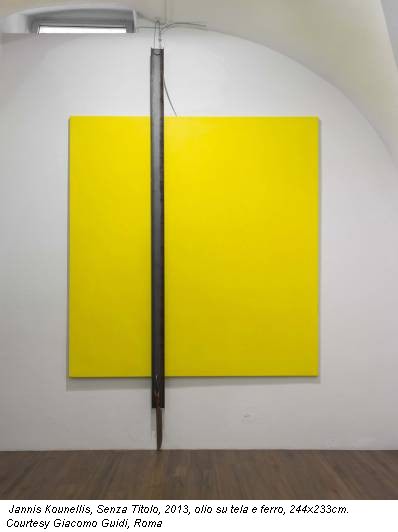 In the big hall on the right: a succession of metallic panels leaning against the walls and enclosing the perimeter of the room. On the floor (slightly to the right) there are twelve bags full of coal, which surround and hold with their weight other coal freely laid down on the ground. Further (slightly to the left) a metallic beam joins the floor to the ceiling. Above two smaller beams depict a structure similar both to a street lamp and a gallows. An electric lantern with the light on hangs from the end of the horizontal beam. Then there are eighteen knives dangling around the circumference of the lantern and crowning the edge of it forming a sort of street lamp. 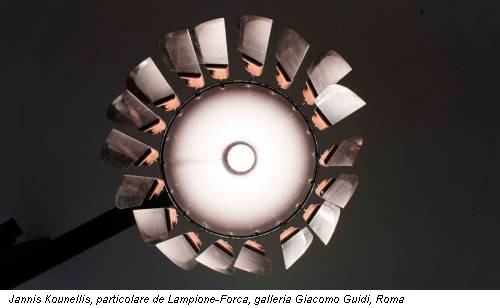 This is the account of Jannis Kounellis’s Exhibition opened in Rome on 20 June 2012 at the Galleria Giacomo Guidi.

My first ‘narrating impression’ comes to mind from the street lamp/gallows in the background. From a distance, the yellowish light of the bulb filters through the blades, giving to the composition a sort of oriental kindness. Scenes of black and white films come to mind, in which demure girls on the fringes of civilization put nylon stockings on lampshades that would otherwise be too bright and pitiless. Going close to the lamp (like a moth attracted to light) and stopping right below it, we have the impression that the knives could take off and strike our heart. We quiver with fear and we feel the bright blades going through our body. Each blade is a ray of sunlight that catches us after a path of shadow and darkness: rays in the half-light of a room, which is transformed in external and, more precisely, in what philosophers have called ‘open’. A huge space embraced in the vision of a close view. It comes to mind the detail of a painting: the lamp in Guernica. There, as well, everything occurs in a room which is as huge as the world. There, as well, the rays shone by the light form solid blades that stuck in the darkness of the depiction but being unable to brighten it entirely. Those sharp and triangular rays are just enough to brighten the horse’s cry coming out from an open mouth. The tongue, again like a blade, glowing upwards seems to make room in the animal’s mouth, setting up a duel between cry and light. 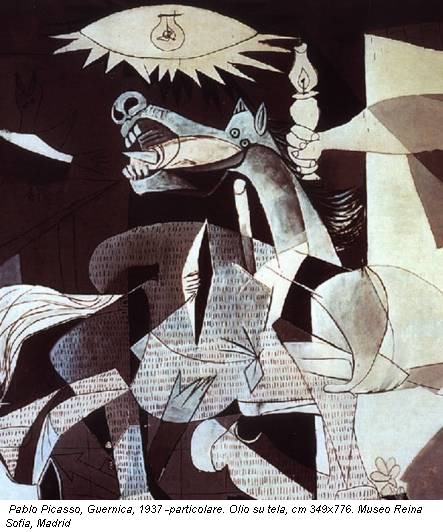 Some steps back and, not too far away, the street lamp/gallows, that earlier looked just liked this, now has transformed in the scene’s signature: a crippled K, its lower leg amputated. It is a sort of self-portrait/signature resulting from the softening of the first letter of his name. A signature set as seal of a scene, something typical of Janis Kounellis’ works without title and guide. A scene in which we feel first accompanied but then abandoned (one by one) in front of the abyss of the view. A scene experienced before us and from which the painter, who conceived and made it, hanged himself, feeling the same loneliness of the visitor.

Some other steps back to go away from the lame/street lamp/gallows signature and we feel embraced both right and left in an enclosure. But this is not a sacred one, like ancient and mythological enclosures we have been told about. There are no churches to erect and share; there is no altar to sanctify. It’s all about a collection of iron leaning against the walls. The panes, as usual, have their habitual format of (more or less) a double bed.

Feeling absorbed in an empty enclosure makes me think of what was inside. I thought: maybe horses, those already painted by Giulio Romano, that in Guernica and finally those living horses showed by Kounellis himself. But now these horses have run away, have disappeared taking with them the negative myths originated by the enclosures that divided stallions from other animals and that led to the origin of the word ‘race’ (It. razza – from Assyrian harsa – stud-farm –paddock for stallions)

The exhibition is not a sacred enclosure where to keep purity, race of an artistic thought or its habitual form, its settled rituals and its typical ways of showing; on the contrary, the exhibition is a field of tension and renewed harmony, even if recognizable and standard elements are used. That is why horses come to mind and, especially, the paddock they are in, the shape of their gathering and their invisible traces on the plate surrounding us. It rightly comes to mind the words of the Italian philologist Giovanni Semerano about horses, enclosures, racism, Arians, Indo-Europeans…

…our pages want to damage destructive ideologies that lead to racism. The same ideologies that in the past separated Indo-Europeans from ancient non Indo-European populations, between us Arians, the rulers, and Semitics, ‘inferior ethnic group’…the Indo-Europeans’ horses are pushed to trot in order to conquer wide spaces. They are not horses that have breath to neigh, shaking their fabulous manes like flags, banners of triumphant glories. They are beasts that, like prophets, bear the weight of sensational fates and emaciated, feverish masters worried about getting lost. Indo-European horses run in barbaric pride, without the burden of the Pindar’s mythological orchestration. They do not wave their tumultuous tails. They have shabby ends that look like luminous wakes. They run like fading meteors.

The iron enclosure built by Janis Kounellis has nothing to do with racism. On the contrary, he uses it to ask us to bastardise with one another when meeting in that iron beds made to welcome unfaithful lovers and tired stallions.

Going back again, our glance stops on the right looking a brown and black cluster of bags containing coal. One cluster and one knot which resemble a mute meeting. But it is not mother earth meeting with its children. This is not a mythological, mystical tale of the coal, that coming out the bowels of the earth tells us about its millenary origin, about forests done up in flames due to crazy volcanoes and then buried in its belly until men discovered them. The tale of the coal is about civilization, industrialization and if a God is celebrated here, its name is Work, the same used in the expression ‘work of art’.

Work of art and work are not just productive activities, “bundles of functions”, but a setting-up through the body of the artist in an “…intertwining of vision and movement…”, as Merleau-Ponty says about the painter’s body. 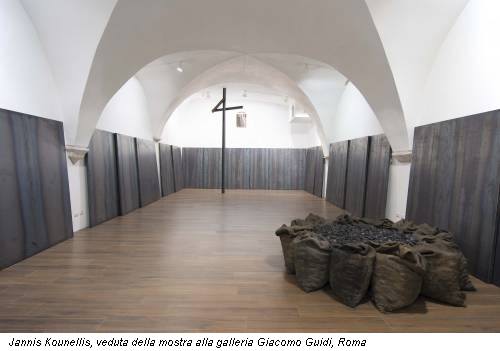 Earlier on, Jannis Kounellis, depriving himself of his leg and becoming lame, has shown us the vision of a street lamp (maybe he already saw it in Picasso’s painting) and a gallows (as a self-portrait):  something that anyone has seen (or imagined to see) in old streets in Europe or in new ones in Asia. Now, thanks to the black colour of coal, he is drawing in the area the burden of a meeting: twelve bodies closed in the bags that surround one body melt on the ground. A meeting told in the Bible first and then by painters of all epochs. But Kounnellis depicts it like an event that has nothing to do with salvation. On the contrary, this event states the weight of things and condemns us to bear it forever, even though with mutual confidence in sharing all together the effort.

One short step back and we are again in the small entrance hall where there is the yellow painting. That painting is as big as Picasso’s Les Demoiselles d’Avignon, that is to say 243,9 x 233,7 cm. It sums up all tales we left behind, enclosed in the alarm of the colour yellow: the iron of beams, the sharp blades, the enclosure of painting on canvas and, in the end, the colour black of coal. 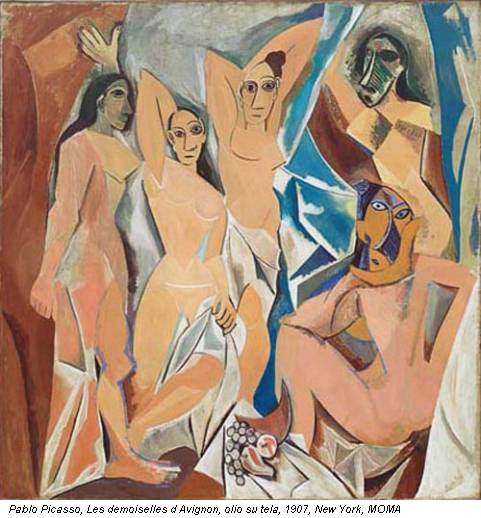 Picasso’s canvas is not the manifesto of an epoch but a painting which by transforming the world into painting gives usthe chance to keep on doing it, as Janis Kounellis did in this exhibition. Finally, stepping back towards the exit to face the street, we abandon the exhibition with a deeper awareness on what Janis Kounellis many times defined “a theatrical cavity”.